In 1999, Hawksley Workman released his debut album, For Him and the Girls. It made him an instant star. In Canada. It’s taken more than a decade for the album to be released in the United States. And as America is being introduced to that first record, Workman has just released his 11th back home in Canada, titled Meat.

Hawksley Workman on MOD Live @ the Base! Make sure you catch Hawksley when he sits down for an interview with MuchMusic VJ’s Sarah Taylor & Jesse Giddings. www.blog.muchmusic.com 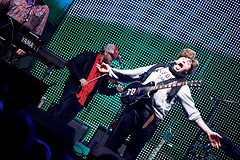