We are excited to announce that Hawksley will be performing three work-in-progress showings of his new theatrical venture The God That Comes at Uno Fest 2012 in Victoria May 27-29.

The God that Comes tells the story of the Greco-Roman god of wine Bacchus (or Dionysus) and uses Euripides’ The Bacchae as a primary source. In a world ruled by greed and an oppressive king obsessed with rules and order, the lesser classes have taken to the countryside in a hedonistic spiritual revolution fuelled by wine, ritual madness, and ecstasy. Women, slaves, outlaws, and foreigners have all gone to the mountain to worship the god of wine, and to commune with their animal needs to dance, to lose control, to get drunk, and have sex. The king rails against the protesters, leading to a bloody conclusion.

This solo performance fuses the chaotic revelry of a rock concert with the intimacy of theatrical storytelling. 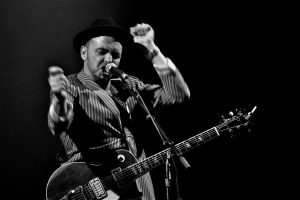 This is a work-in-progress. Development partners have included Alberta Theatre Projects, Intrepid Theatre and The Banff Colony. The piece will premiere as part of the ATP playRites Festival in March 2013, and will go on to tour nationally and internationally.